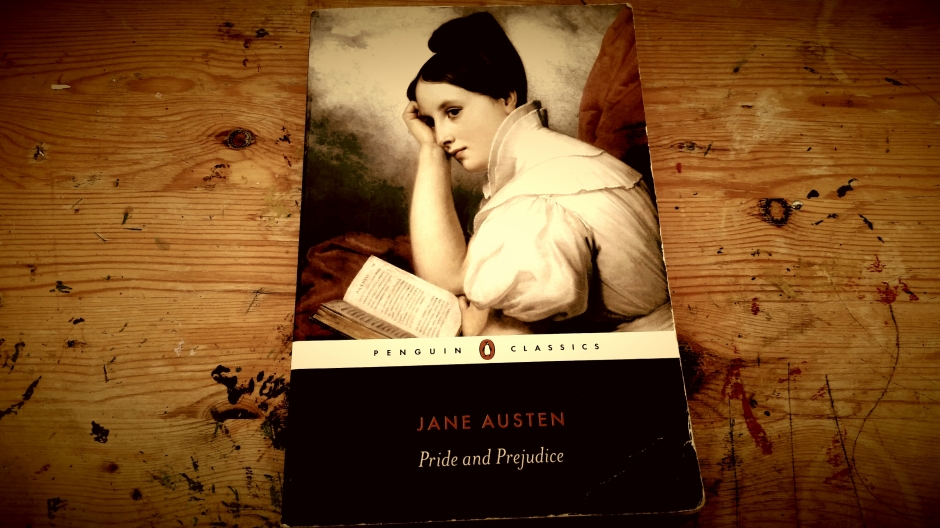 But vanity, not love, has been my folly. Pleased with the preference of one, and offended by neglect of the other, on the very beginning of our acquaintance, I have courted prepossession and ignorance, and driven reason away, where either were concerned. Till this moment, I never knew myself. – Jane Austen, Pride and Prejudice

⭐ ⭐ ⭐ ⭐ ⭐ Very likable main character. Romance is slow and genuine, not instant attraction and good portrayal of two women building each other up.

After not really enjoying Jane Austen’s Emma I was very hesitant to pick up this novel. But I didn’t want to give up on Austen’s work totally so I put it in the last chance saloon and picked up her most famous work: Pride and Prejudice.

Elizabeth and her five sisters step out of their sheltered world by the push of their mother, desperate to find them husbands. They soon learn that not everyone is as honourable as they seem and never to judge a character too quickly as they discover all the flaws in 1800s match making.

Boy am I glad that I gave Austen a second chance. Pride and Prejudice is nothing like Emma. First of all, Elizabeth is so much better a character than Emma. Raised in a family with an overbearing, embarrassingly needy mother who is desperate for her daughters to be married and two incredibly immature younger siblings, it’s shocking how down-to-earth she is. But Elizabeth Bennet is nothing but mature.

Despite society pressure, and her awful mother, she refuses marriage to gentlemen from ‘good’ families with lots of money. She is confident in herself, clever and incredibly devoted to her older, more beautiful sister Jane.

Jane and Elizabeth’s genuine friendship throughout the novel, which shows no sign of jealousy despite Elizabeth continually been told she’s less pretty than Jane, was one of my favourites in all literature. When Jane’s caught ill while visiting a friend Elizabeth walks miles just to look after her. Elizabeth and Jane constantly confide and share personal revelations and feelings with each other with total trust of the others confidentiality and advice. If you’ve ever read The Fandom by Anna Day, think Violet and Alice but then twist it on it’s head: take out all the bitterness and back-stabbing that really has no place between real friends.

This book is about romance, but my favourite sort of romance: Darcy and Elizabeth (I don’t feel I’m spoiling much by giving that pairing away, they’re one of literature’s most iconic) don’t fall instantly in love. Actually, Darcy calls Elizabeth ugly when he first meets her (she’s a better person than me seeing past that insult). Theirs no trace of insta-love between the two and their attraction seems more genuine than just look based.

But they both get to know each other as people, slowly removing their misconceptions (which some may call prejudices hehe) about each other and swallowing their, you guessed it, pride. The quote at the top of this review actually refers to the moment Elizabeth realizes that she is wrong to judge people so quickly. She explains that by deciding she liked one man at first sight and not the other corrupted her from seeing what was actually going on. Before she had always felt she was reasonable so this revelation leads to the final line: “Till this moment, I never knew myself“.

Elizabeth spends most of the book hating Darcy and not at all interested in him, despite his wealth, and it’s only when she realizes who he is as a person that she begins to like him. Basically they get together for all the right reasons and are one of my favourite literature couples.

Similar to Emma there is a bit of learning to be done in this novel. It is a sort of coming of age for Elizabeth as she realises people are not always what they appear, that whole prejudice thing again. And Darcy starts to treat people much better and regrets being so rude to Elizabeth during their first encounter. Them learning from each other and truly caring for one another is probably the sweetest aspects of this novel. Their growing in character together just makes their love story more immense.

For me, this book is the perfect love story. Which is why I’ve rated this book so highly. I really enjoyed it, it’s very clever and felt ahead of it’s time.

Have you read Pride and Prejudice? Do you share similar opinions to me on love stories? What are you reading at the moment and do you think you’ll ever pick this novel up? Be great if you left a comment!

14 thoughts on “Review: Pride and Prejudice by Jane Austen”