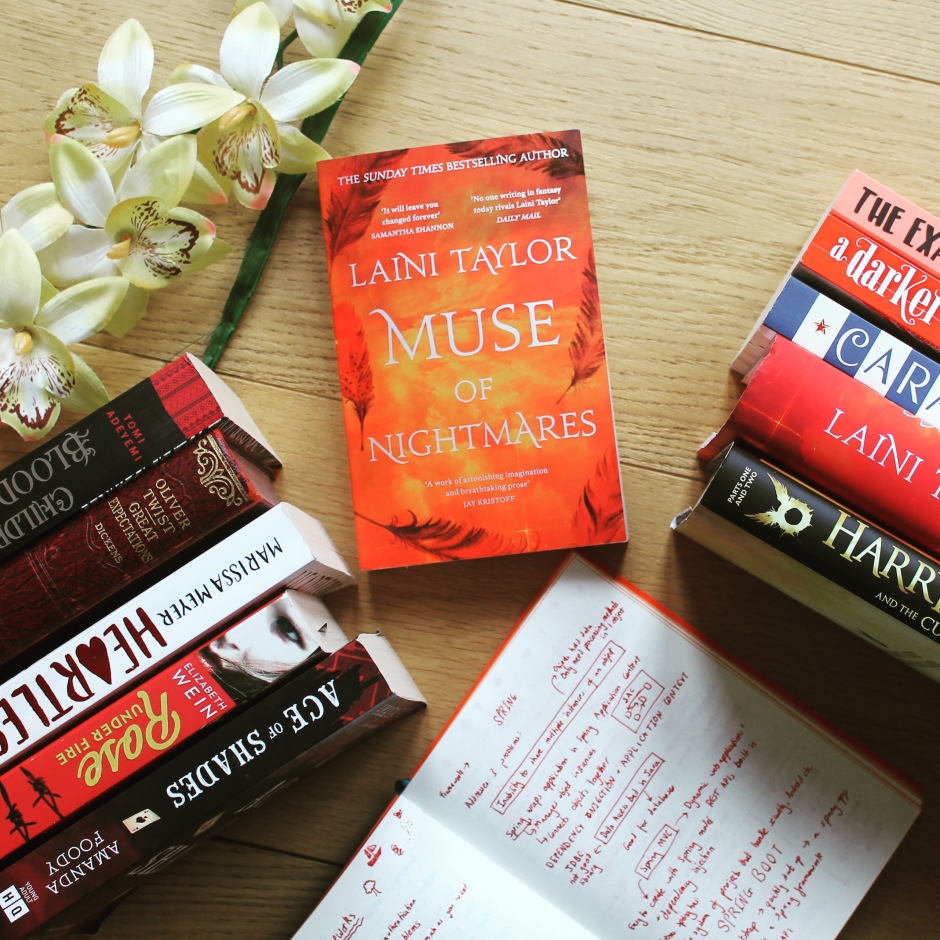 I was gifted a copy of the book by the publisher in exchange for an honest review as part of the paperback release blog tour. This is a 100% genuine review, and not influenced by this! 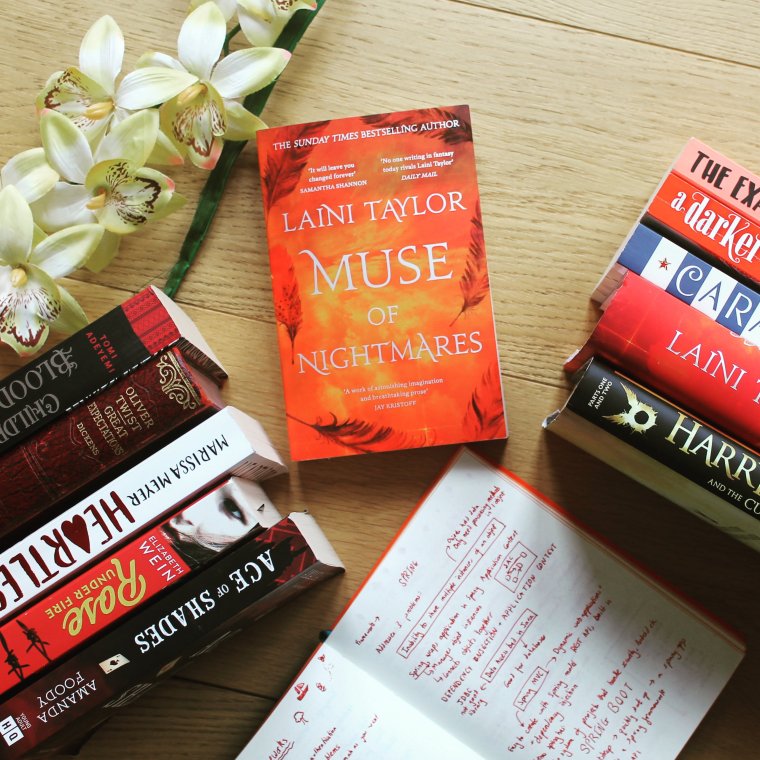 Muse of Nightmares is the heart wrenching sequel to the popular fantasy novel, Strange the Dreamer. Starting where it’s predecessor left off, Lazlo is desperate. Loving a ghost at Minya’s command he is forced to make a devastating choice: loose Sarai or destroy Weep, and the only friends and family he’s ever known. Despite his friends on Weep’s hatred of the godspawn he still clings to one, impossible shred of hope: that they might find a world that welcomes them after all. But as Skathsis’s victims turn on each other in their grief and anger it becomes almost impossible to build bridges in a world bent on tearing them down.

Taylor shows no mercy to her readers in this powerful sequel. The only villain in this series died fifteen years before the story began, leaving only his victims, cobbling together a life for themselves while carrying the anguish of what they have lost. Every character is introduced to the reader in complex and minute detail that drags the reader into their elaborate existence, their backstory so vividly described that when the characters lash out, raw with emotion and grief, it is almost justified. But this makes their triumphs and compassion even more moving to the reader.

Whether the character’s development takes place in the past or the present of the novel, it is well written and compelling. From Minya learning to find strength in others, Eril-Fane discovering how to forgive himself, Nora preserving for her sister and even Thyon humbling himself to rebuild a better life. Character development is at the heart of this novel and I love how intimate the reader becomes with each character and how they understand the gravitas of each decision they make and the forgiveness they learn to show.

“People are our safe places. I have one: a person who’s a home and a world to me.“

The theme of friendship and family is still prominent in this series, particularly in the heart warming chapters set in Weep where Thyon learns the value of trusting others. Minya’s shifting relationship with her ‘family’ also highlight this theme and, of course, Kora and Nova’s sisterly relationship was a stark reminder of the bonds that tie these frail characters together. This theme is explored and tested throughout the novel and manifests to the reader in many different forms and situations.

One of the settings, Weep, has already been detailed in its predecessor, Strange the Dreamer. The reader sees less of Weep in this novel as the main focus is on the citadel, which becomes an elaborate labyrinth for the godspawn to explore now they have Lazlo’s gift. I enjoyed the icy descriptions of Kora and Nova’s homeland, an Eskimo like setting with cruel undertones, and found the contrasting world’s woven together well throughout the story.

“Hope was luster, and they had shone with it like twin pairs in an oyster”

My reasoning for giving Muse of Nightmares four stars instead of five is that it is needlessly dark in places. Almost all the characters have been raped or are born because of rape, and many of these incidents are just thrown haphazardly into a character’s backstory, which I felt was unnecessary and didn’t give enough gravitas to this abhorrent crime.

Taylor’s writing style, much like in Stange the Dreamer, is well crafted and mesmerising. The reader is presented with a plethora of unusual words, coupled with each characters’ intimate feelings, portrayed in a relatable and digestible manor that any reader can become immersed in. I particularly enjoyed Kora and Nova’s story, dotted amongst Lazlo and Sarai’s. The story was captivating in itself and the stark change from our protagonists’ current situation. Each Nova chapter left me wondering how the stories would eventually intertwine, adding an extra complexity to the mystery already being told. The dark tones of Nova’s story foreshadow the lives of the godspawn and, as I began to see where the tales would merge, the devastating meeting is even more powerful for this build up.

“There comes a certain point with a hope or a dream, when you either give it up or give up everything else“

The plot of Muse of Nightmares is laid out differently to almost any other novel I’ve read. There’s nearly 300 pages of action towards the end of the novel and a third of the story is what I would consider the ending. This felt like an unusual plot decision and I wasn’t altogether sure I liked it- there was a part resolution in the middle of this action that felt out of place to the pacing of the novel and turmoil surrounding the characters. The final resolution also felt quite long, the characters endings were drawn out as their future was described. I really like how the ending felt, however, like this novel was just small part of the characters’ stories and that they would go on to new adventures. I actually enjoyed the fact that not every budding romance blossomed in this novel, it left more creativity to the reader and I was satisfied not everything was resolved and the characters would keep developing in their own realms.

The target audience of Muse of Nightmares is certainly mature, fantasy readers. As mentioned above their are lots of darker themes and trigger warnings for rape and suicide. Furthermore, Minya’s dreams were terrifying and I definitely wouldn’t recommend this book to anyone easily scared, I may have skim read the dreams myself given their creepy tone.

Overall, I really enjoyed Muse of Nightmares. I love falling into Laini Taylor’s well crafted world and the characters are well developed and unique. I would recommend it to any older fantasy reader who can cope with the darker themes the novel presents.

11 thoughts on “Muse of Nightmares”