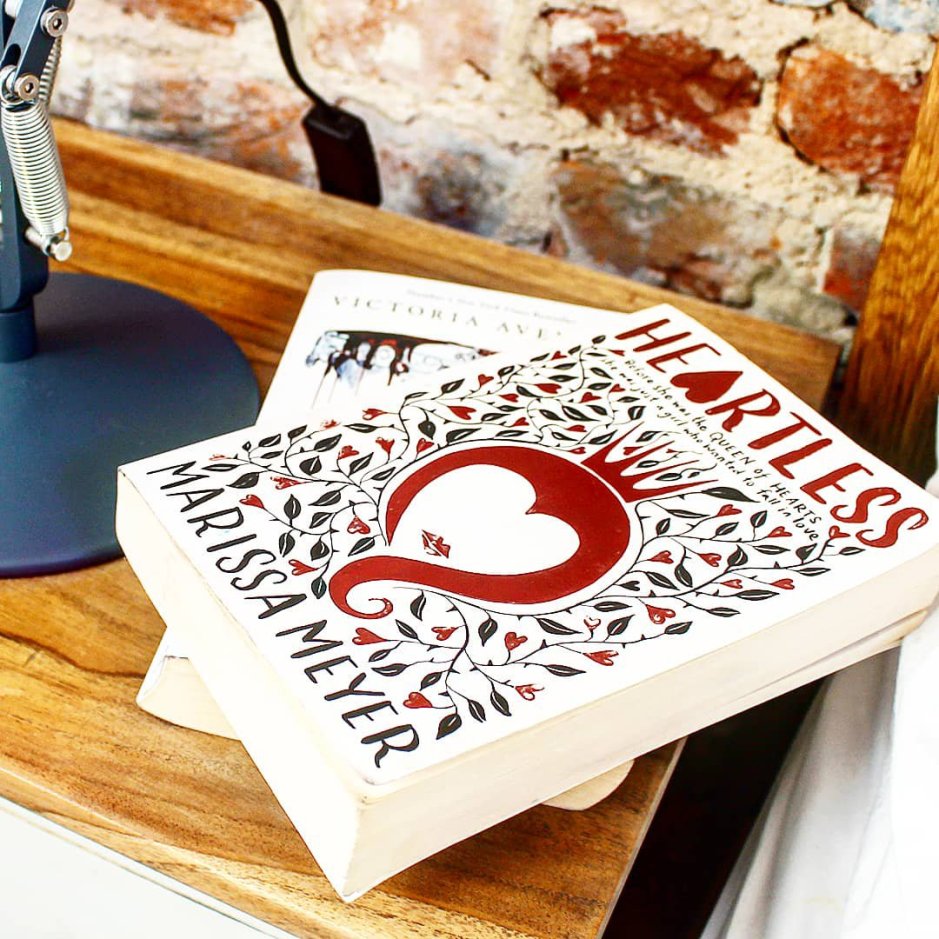 Everyone knows Alice Wonderland: the ageless children’s classic written by Lewis Carol about young Alice falling through a rabbit hole, encountering a plethora of unusual characters at the Mad Hatters tea party, stumbling into Cheshire the disappearing cat, nearly being beheaded by the savage Queen of Hearts before finally escaping Wonderland. The story no-one knows is how the Queen of Hearts, that manic, angry ruler, came to be so cruel.

Lady Catherine Pinkerton of Rock Turtle Cove is many things: exceptional baker, begrudging cat owner, dutiful daughter, king’s favourite, hopeless dreamer. What she’s never been is a lover. But when she stumbles into this new role, falling for the court joker mere minutes after the king has decided to make Cath his queen she is left trapped between the life she wants and the one she’s supposed to have. While Cath ponders throwing her life away for the man she loves or staying and dutifully marrying the charmless king panic rages over Hearts as attacks by a fearsome Jabewock become ever more frequent.

“But hoping,” he said, “is how the impossible can be possible after all.

Cath’s character is frustratingly likable. From the delicate treats she bakes to her tolerance for belittling friends she is nothing but a delight to everyone she meets. This kind and generous character is what makes Heartless so intriguing as the reader is constantly guessing what horrible incident will occur that will turn Cath into the repugnant Queen of Hearts. Cath’s innocent character slowly develops throughout Heartless from the dutiful daughter to a headstrong, rash lover, but this character development does not show much likeness to the foul women she is destined to become. As Cath gradually becomes less tolerant, often pointed out by various characters voicing their perception of her and foreshadowing her future, her overall pleasant character leaves the lingering question in every readers mind as they await her decent into the bitter, vengeful Queen of Hearts.

Jest, the court joker and the male lead in Heartless, was difficult to guage. His illusive motives, closed personality and constant shows make him difficult judge, presenting similar worries to the reader that Mary Ann voices: does Cath know the man she wants to run away with. This illusive love interest leaves the reader in turmoil as neither decision Cath can make appears correct. Meanwhile, the surrounding characters in this tale are pleasingly well developed while maintaining Carol’s nonsensical themes: Hatter being determined and loyal, yet leaving his motives difficult to decipher. Mary Ann, Cath’s maid and best friend, is practical yet hopeful and even the king showed multiple dimensions as he was doting, skaty and cowardly. The plethora of side character that Meyer slowly develops throughout Heartless embellishes the story while keeping Cath central to the plot, until they finally evolve into their Wonderland equivalent or are left with the readers compassions as they fall to Cath’s reign.

Sometimes your heart is the only thing worth listening to.

The writing style of Heartless felt whimsical, similar to that of a fairytale, which pairs well with Carol’s original story. The nonsensical similes, additional rhyming couplets and plethora of unusual details seen as normal to Cath’s world embellished Carol’s world while still presenting a neoteric story in itself. Meyer’s choice to tell Heartless from Cath’s perspective, third person, within this charming setting further built up Cath’s picture of innocence and kindness while making the foreboding tone even more prominent as the story leads to its inevitable conclusion. Seeing the events from Cath’s perspective adds gravitas to Cath’s decision as readers are left grappling with her inevitable failure and the knowledge that the charming fairytale setting is doomed.

The setting of Heartless is somewhat familiar to the reader from Alice in Wonderland however Meyer adorns Carols world with additional details and complexities. Cath’s world, initially limited to the king’s ballroom and her parents manor is simple and easy to introduce to the reader. As Cath slowly ventures to explore Hearts the reader does too allowing gradual and detailed world building to spring up amongst a simple plot. This clever style works well as Cath and her reader are slowly immersed in the whimsical world of Hearts, both delighting in its discover together.

Fascinating, isn’t it, how often heroic and foolish turn out to be one and the same.

The plot, too, continuely gives the reader hope. With each difficult decision Cath is forced to make there is a slim chance that it is reversible, or that the choice will prove correct. Meyer provides the reader, and Cath, with false hope often throughout the events of Heartless until the closing chapters where it is clear how the tale will unravel but both are powerless to intervene.

Heartless felt well paced. Quite short Meyer refrains from unnecessary details while still engrossing the reader in all the complexities of this unique world. Furthermore, the whimsical feel of Wonderland gave Heartless of good balance between explaining all the plot points while leaving a whimsical trail of finer details, little nuances and intricacies of the fantasy setting unexplained akin to Carol’s own work. 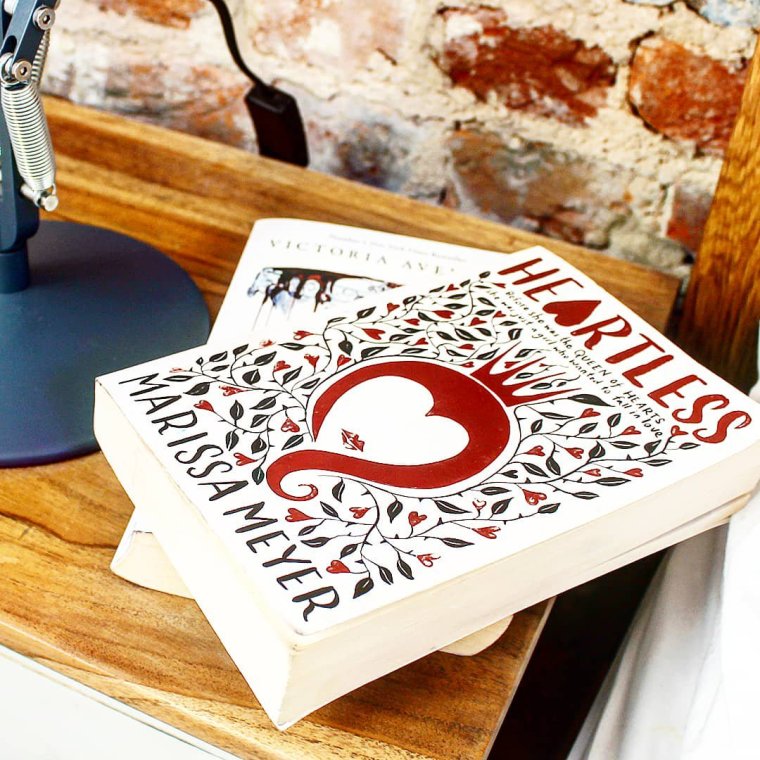 Cath’s youth and innocence is a constant theme in Heartless. From her whirlwind clandestine relationship with Jest to impractical dreams of becoming a baker, indulged only by her maid, she demonstrates a lack of maturity and experience throughout the novel. This innocence can be likened to Alice in her own tale as the theme persists in Carols writing. Cath’s innocence is both pivotal to the plot and key to the reader as Meyer explores Caths need for independence from her parents and maids in this critical point her young life.

Relationships are key to the plot. With Cath’s delicate kindness to the king, almost sisterly friendship to her maid, fiesty romance with Jest and jovial banter with Cheshire her different interactions explore her ever evolving character and complex tapestry of Wonderland’s occupants. Similar to other devices used in the novel these relationships are nothing but bittersweet to the reader who knows, begrudgingly, that the Queen of Hearts that Cath becomes is a solitary character.

Impossible is my specialty.

Although mostly light hearted the novel does, of course, contain reference to beheading, animal death and murder. It is not particularly graphic and the nonspecific and whimsical feel make it suitable for any reader. Although Cath’s age is not explicitly given the novel is probably targeted at teenagers but would make an intriguing and fun read for adults also.

From its pretty cover, intriguing heroine, foreboding plot and complex characters Heartless is a unique and fun standalone novel that any reader can enjoy.