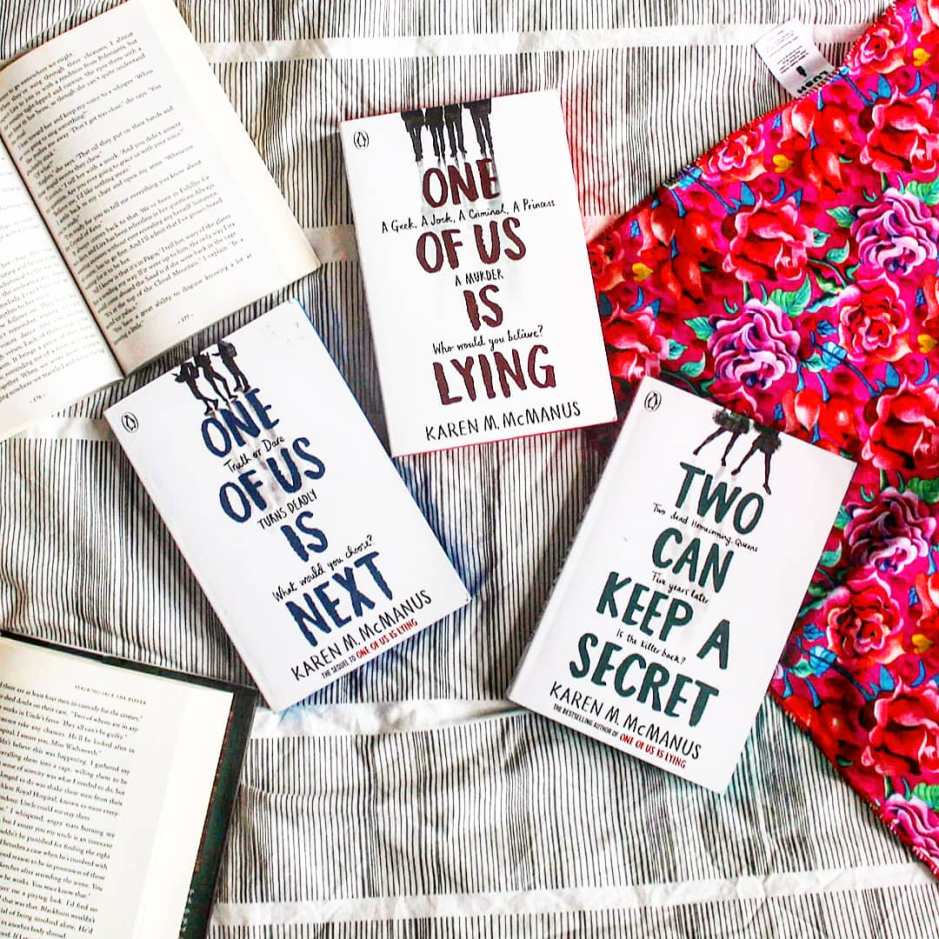 Having polished off One of Us is Lying in one night, the impossible mystery and desperate characters hooking me in, I was only excited when I heard the announcement of its sequel. With a slightly cringe blurb and fear that nothing could live up to the hype, I was relieved to find One of Us is Next just as captivating.

Bayview High welcomes the return of its students after a year of speculation and investigations into the death of a student. With the truth about Simon’s tragedy out Maeve, sister to murder suspect Bronwyn, knows more than anyone the toll last year had on Bayview’s targeted students and sees the danger more than anyone in the popular Truth and Dare game that suddenly surfaces. The first round reveals a shocking truth that destroys popular student Phoebe’s life. The second convinces Bayview the game is harmless. The third proves it’s not. The final play will end the game. But as Maeve steps closer to uncover the shocking truth the game turns on her, revealing it’s not just Phoebe’s life the truths can destroy. But Truth or Dare may be covering up something far more sinister than rumours and secrets as Bayview discovers once again that everyone has something to hide.

One of Us is Next presents three protagonists and narratives: Maeve, Knox and Phoebe. Maeve is Bronwyn’s sister, a protagonist from One of Us is Lying now known as one of the “Bayview Four” after the media scandal a year ago. It’s through Maeve readers see a window into the old protagonists lives while still focussing on the current plot. Having grown up with leukemia Maeve struggles to let herself be loved and merely touches the surface of school drama and social circles: always unconsciously believing her cancer will return and not wanting to say goodbye. Her character development is pivotal to the novel as she slowly let’s others in and her narrative is from the unique perspective of someone who has seen the damage gossip did to her sister last year, leaving her with little time or respect for the Truth or Dare game.

Phoebe is popular and attractive. Believing herself to be an open book she is shocked to find herself the first target of the Truth or Dare game and discovers the cruelty of game first hand. It is through Phoebe that McManus explores views of young women in society: from her pushy boyfriend to the slut shaming that follows her around school. The novel only touches upon this critical theme and fairly lightly delivered feminism that could have been explored more, but Phoebe’s ever growing character and social circle, from a kind hearted girl embarrassed to be seen with Knox to one who takes charge on a stake out presents critical changes. The novel suggests there is more to come from this young protagonists as she struggles through the desperate situation the Truth or Dare game places her in.

Knox, our final and only male protagonist, is another student at Bayview to be hurt by the Truth or Dare game. Ten years younger than his four older sisters Knox struggles growing up as nearly an only child, disappointing his father at not being the son he wanted and struggling to define his relationship with his only friend and former girlfriend Maeve. While his chapters focus on the drama unfolding at his school he also has a wider view of the world from his job at a charity law firm that offers representation to those the law often fails. From the pressures his family place on him he is struggling to work out where his interest truly lie and what sort of life he can see for himself after school, presenting key themes of toxic masculinity and the pressure young men feel in society. These critical themes are only lightly explored as his chapters focus on Knox’s character development leading to the novels dramatic ending.

Little world building is required in this novel as many settings are reused from One of Us is Lying, principally Bayview High and the town. The novel broadens somewhat as we see the café Louis works in take prominent feature but McManus’s writing style lends itself very little to development of the surroundings, rather focussing on her characters. The first person perspective and almost TV soap like fast paced dialogue and action is a staple of McManus’s work. The novel is quick to read and easy to digest, the slim book impossible to put down. Chapters are narrated from a first person perspective making the events of the novel and the effect it has on each narrator all the more weighted.

The plot felt more convoluted than McManus’s previous novels. Rather than centering on one mystery the novel explores different pathways, details that were often overlooked becoming important and clues being given to our protagonist rather than sought after. This meant the novel lacked direction and stability in places that the single murder investigation provided in One of Us is Lying. The intensity was somewhat missing and the haphazard display of clues, although intriguing, felt forced in places. Furthermore the pressure of a police investigation and the knowledge of imminent arrests would have given the events of One of Us is Next a more foreboding and urgent feel. Although less clear the novel did still contain the thrill of a mystery while developing key protagonists and subtly exploring crucial themes.

Accompanying the captivating plot the pace of the novel, following each clue and text, never slows. However the novel often presents a clue or hints at a revelation yet waits a few chapters before revealing this truth to the reader. This could be frustrating at times and this plot device felt overused: oftentimes the clue forgotten as the novel moves into different dialogue and the mystery lacking gravitas when it is finally revealed. The novel builds up to what the reader knows must be a murder yet it feels slower than One of Us is Lying, that commences with Simon’s death. This makes One of Us is Next slightly less exciting and it is occasionally confusing if the reader should worry about who started the Truth or Dare game given its lack of prominence among the other mysteries.

Romance has always been an element McManus keeps real, developing very real relationships at a time in our young protagonists lives that is so pivotal. Bronwyn and Nate, a couple central to One of Us is Lying, are shown to be struggling with long distance, a reality for many young couples who meet in secondary school but go to separate universities. The reality of making this work is craftily woven as the novel strives to avoid the toxic literature trope that relationships are easy after the initial steps of becoming a couple. Similarly, Cooper and his boyfriend struggle with deciding a future together based on their respective career prospects while still incorporating issues Cooper faces as an openly gay sportsman. Although both these relationships are not focal to the novel as it follows three new protagonists there feature and continued development is artfully crafted and their struggles dotted throughout the novel add a sense of reality to what could have become a simple staple from the previous novel.

One of Us is Next develops new relationships as well as building on those from One of Us is Lying. As Maeve slowly allows herself to make real connections with others the possibility of a relationship with Louis emerges. Louis serves a continual reminder to our protagonist that there is life after school and it is possible to live away from the toxic gossip Bayview High adores. This makes his character refreshing as McManus develops him past the jock and best friend to Cooper he was in the previous novel, his chemistry with Maeve is slow to appear as Maeve begins to allow herself an opportunity at love. McManus also takes care that her characters are in the right place to commit to relationships, showing maturity to her young readers. Phoebe hints throughout her narrative that Knox is more attractive than she cares to admit but when she attempts to start something Knox expresses that she’s not in the right place. Both mature and important the novel values consent and hints that these characters and their relationship will continue to develop, a refreshing feel.

Romance is not the only relationship explored in the novel. Maeve and Knox, formally a couple, present a unique platonic friendship between a female and male protagonist which is tested as the rumours slowly start circulating. The shift in their relationship dynamic is pivotal to the plot while still presenting something unique as they both demonstrate that their relationship is clearly just Friends, a dynamic rarely shown in YA. Knox’s relationship with his dad is similarly explored. As a builder his father struggles with having his only son interested in law and plays rather than sport and construction. As they both slowly accept Knox for who he is the novel follows a path which many teenagers can relate to as the pressure of parents looking for themselves in their children is common. Finally the relationship between Phoebe and her siblings is explored as they struggle to knit themselves back together after loosing their father. Although the rift is never fully healed the dynamic is well written and the observations between the various sibling dynamics in One of Us is Next is well presented.

McManus demonstrates to her teenage readers that there are many valid career paths one can take and that figuring out your life at eighteen is not always possible. This positive message is portrayed subtlety yet vitally throughout the novel: from Addy callous comments about not wanting to pay extortionate amounts for university when it might not be for her to Nate working his way up the construction company. Knox’s internship at a lawyers and Louis’s job in the family business serving as further examples of equally valid career paths. The novels exploration of our young protagonists lives and future is vital and it’s presentation of valid career choices is a positive message for anyone, especially in a judgmental society that sees university as the only option for success.

One of Us is Next contains less dark themes than One of Us is Lying. There is alcohol abuse, murder, death threats and loss of a family member. The target audience is likely sixth formers and older teens, the novel centering on students in their final year at school.

From the development of familiar tropes to realistic, fleshed out and captivating teenage characters that face common social pressures while solving impossible mysteries McManus’s tales never dissapoint. One of Us is Next is the sequel we didn’t realise we’d need but now know we love.