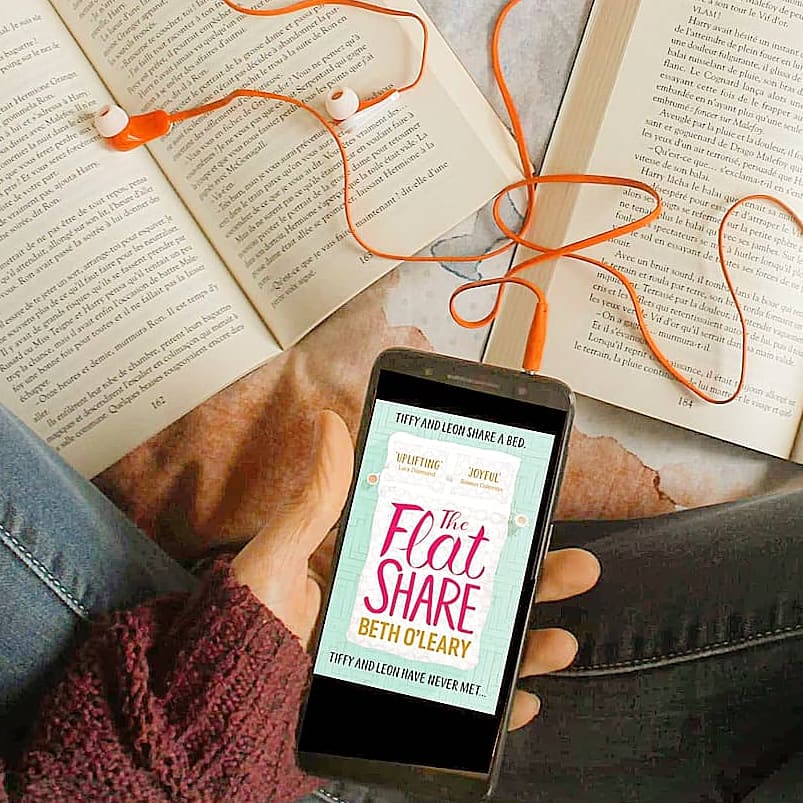 While dealing with hard truths and the struggling reality young people face as they first venture into the world The Flatshare is real and emotional at times yet offers a comforting, cheery and overall uplifting read centring around a unique premise.

Desperate to get away from her toxic ex boyfriend Justin and facing London’s discouraging housing situation, Tiffy Moore accepts an unusual living situation: a Flatshare with palliative care nurse Leon. Leon works nights and spends weekends with his girlfriend Kate meaning the flat is his prospective roommates at all times except 8-6 during weekdays. As Tiffy’s bubbly personality and unfortunate taste in blankets slowly start to encroach into Leon’s small flat he begins to wonder if he really thought this offer through. Slowly, the two begin to share note written jokes and left over dinners as they realise that you can’t remain a complete stranger to you flatmate forever.

The setting was perfect for this novel. As a young graduate, fresh from university and working in London I couldn’t relate more to the subtle humour and added gripes about the capital the novel presented. From business men on scooters to basically working for free in the creative industries to the struggle it is for Londoners to find a place to live the novel encapsulates everything any young twenty year old feels after university when moving or working in the capital. The setting is relatable, realistic, unique and refreshing to see as London was brought to life under O’Leary’s creative hand.

Tiffys character presented a snarky, emotive and humorous monologue that was the backbone of the Flatshare. Riddled with sarcasm and self discovery her chapters present the complex character of a young woman slowly realising she is an abuse victim, the pressures she feels as she suddenly finds herself single and the positive steps she takes like going into therapy, ever guided by her supportive friends. As her character develops throughout the novel the story arc is heartwarming and empowering, this young protagonist perfectly encompassing the realities and struggles of being a young woman in the current day in an honest, light hearted and entertaining manor.

Leon I found harder to connect with. In both his notes, narration and his life he is more guarded than Tiffy, the reader is shown little of his past besides the odd comment about his childhood with Richie and his mum, he rarely shares with the reader his feelings. His curt decisive monologue was almost jarring compared with Tiffy’s bubbly and personalised chapters. Although his chapters were less entraining they do progress the plot and his character does slowly become more outgoing as his relationship with Tiffy develops, the humour he slowly begins to demonstrate in his notes and the epilogue a testament to this.

The pacing of the novel was well done. The novel covers nearly a year in our young protagonists lives, separated into months, however the reader never feels rushed between scenes, only guided by the calendar. The timing was crucial to the novel and what made Tiffy and Leon such a good couple: the slow burn romance and time and space they give one another as they navigate their previous relationships. Furthermore the stretch the novel takes on time means the reader can truly see these protagonists developing, it is clear that Tiffy is not healed instantly from her toxic relationship with Justin and shows the reader that time does eventually heal all wounds. The care and attention the author takes to restore her young protagonist and the strength Tiffy learns to show is an encouragement to the reader as Tiffy rediscovers and falls in love with herself again.

The plot of the Flatshare centres on more than just Tiffy and Leon’s romance. Leon’s brother being in prison, a hunt for a dying man’s lost love and Tiffy launching a new book called ‘Crochet your Way’ are all central to the events of the novel. The reader receives a rounded view of Tiffy and Leon’s existence as we are introduced to their work places, social scenes and, of course, the flat they are sharing. The novel does well to show the reader a year in their lives as our protagonist grow together their character arcs and development central to the plot.

The writing style was wholly dependent on the narrator. Tiffys chapters are light and bubbly, full of her personality, worries and sarcasm. These were my favourite chapters. Meanwhile Leon’s tone felt clipped as he briefly describes what he is doing without personal pronouns and minimal embellishments. This made him a more difficult protagonist to connect with. The note passing between the two, including funny cartoons and left over tiffin, really brought the novel to life, the silly quirks and little comments adding to the humorous tone O’Leary writes in.

Having read the novel on audiobook I recommend this as a way of digesting Flatshare, however Tiffy and Leon’s characters were narrated by two separate people and it was difficult to relate Tiffy in Leon’s chapters to Tiffy herself and vice versa as the voices were different. Nevertheless the audiobook still wraps the readers attention but I’d say doesn’t add anything to the experience.

The Flatshare will have readers laughing, cheering and glaring as they witness a year in Tiffy and Leon lives. From blossoming love to an unwanted proposal broadcasts across YouTube the Flatshare encompasses everything from the bizarre to the mundane, O’Leary always throwing a good level of sarcasm and charisma on top of any situation. I recommend it to any young adults at the cusps of their careers, espcially if you work in London, as you’ll get a good dose of feels and a hearty round of relatability.

You can find more of my reviews here and also over on my goodreads.

One thought on “The Flatshare Review”