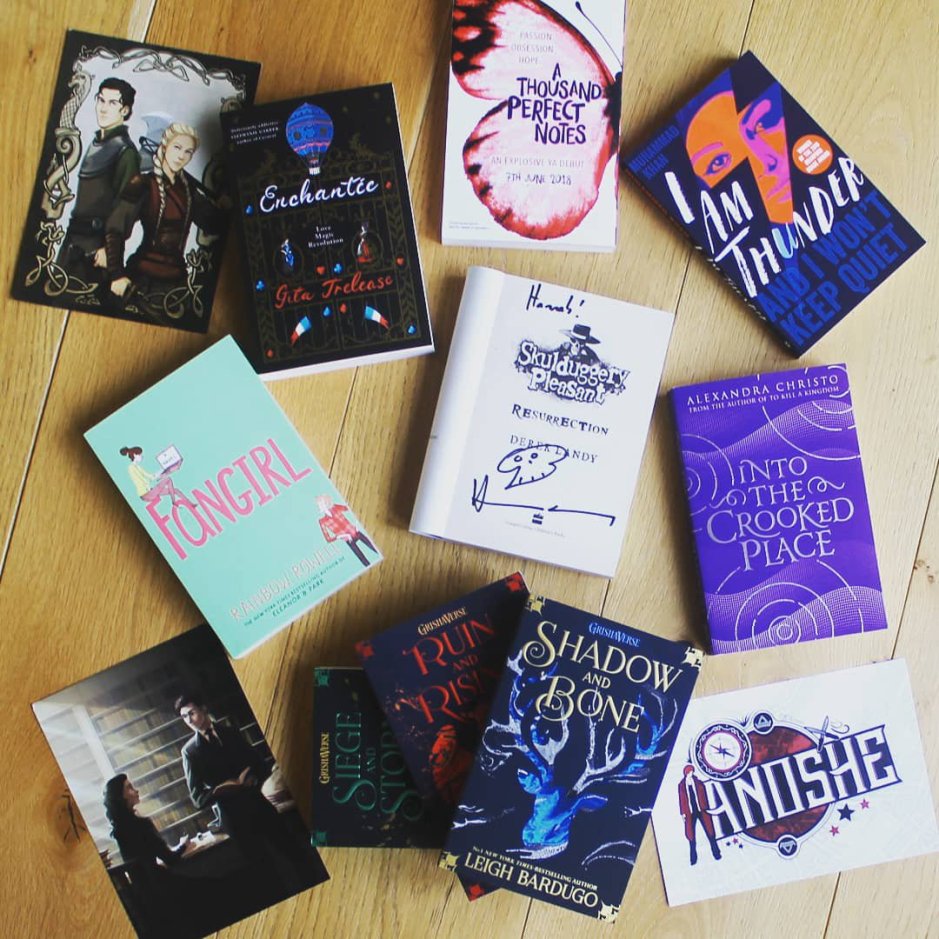 A long time ago, in a land far far away (relative to your position to London) I went to my favourite, and let’s face it only, book convention of the year: YALC. And afterwards I got really excited and snapped a host of photos of my haul. I had a big plan to go put up a fancy book hoard post and then look back next year and see if my initial blubbering thoughts aline to my actual opinion on the books. But then the post sat in drafts, undiscovered, until I had the crazy idea to sign up to post something everyday for a month.

And then, lo and behold, I unearthed these forgotten posts. And, well, long story short, lacking the big quest and the dragon and all that (sorry about that one), I smartened up the post and hit that ever scary ‘publish’ button.

The post has my original thoughts, from August, about the books and my predicted rating. Once I’ve finished them all we can see how well they did…

The French set historical fantasy all about the revolution? I love the sound of this fantasy Les Mis. My friend has highly recommended me this one so I’m going with an optimistic five stars. No pressure Enchatee.

I traded a book at the book swap for a very pretty arc of Paper Fury’s debut novel. I’m not entirely sure if I’ll like it since I don’t often read contemporary but I’m curious what this blogger come author can do. I’m thinking it’ll be a three star read based on what I’ve heard, but wanting to be proven wrong.

Another book swapee! I don’t know much about this novel other than it has a gorgeous cover and seems to be pretty popular. As I’ve no clue what to expect I’m going for the middle of the road 3 stars.

Into The Crooked Places

I haven’t read a Skulduggery Pleasant for years. Derek Landy finished the series back when I was at school but then came out with a sort of continuation thing set a few years after The Dying of the Light. When I heard the author would be at YALC I thought I’d give it a try, but I’m nervous jumping back into my childhood favourites. I’ll give it a cautious four star prediction.

Honestly, I picked this novel out at the book swap because it always looks so cute on Bookstagram. But I have wanted to read it for a while since bookworm at university might just sum up the last three years for me. I’m going with an optimistic prediction of four stars because it’s not my genre but I’ve heard good things.

I’m finally going to read some Leigh Bardugo! And just look at those covers 😍 I’ve heard good things but everyone tells me Six of Crows is better than the original trilogy, so I’ll predict four stars for all three.

There you have Summer Book Haul part 1! Stay tuned for part 2, which should appear on the 18th, depending on how well I stick to this blogtober schedule.

Have you read any of the books? Are they on your tbr? What do you think of my ratings and what would you predict/rate the novels yourself, if you haven’t/have read them? Hope to chat to you in the comments section!

Every year for the last five years I’ve attended YALC, the Young Adult Literature Convention, in London. Circled my calendar, pooled over the schedule and, with pages curling in the 38 degree heat of last Thursday, stuffed my rucksack full of books. After a brief debate if I’d really need a hairbrush for the one night I’d be staying at my friends in London I was set and ready to go. And for those wondering, I decided I did not need the hairbrush, and I’m sporting a frizzy birds nest by day two just to prove it.

On the train up I was casually pondering if I’d forgotten my toothbrush when my friend, book blogger inspiration and bookish partner in crime, Jo rung me to gush that she was ready, about to stumble to the convention three hours early and would I please hurry up. My apologies on the railways behalf, because what does signalling problems even mean, and my assurances that I’d be there before 10:30 quickly turned to fangirl babble as we compared books and planned our day.

The convention centre felt suspiciously cool when we arrived, usually a sweltering hall crammed with book lovers in the thirty degree heat of July. Suspicious but relieved, we grabbed a few signing tickets before heading over to the agents arena because Jo wanted querying tips for the book she’s just written.

On unforgiving plastic chairs that creaked everytime I shifted slightly, which of course I couldn’t stop doing all of a sudden, I vaguely listened to the agent explain query letters while Jo dutifully took notes. There may have been some scrolling on my part. And I may have thrust my Twitter in front of Jo a handful of times because cute puppy or exciting read. Basically if Jo struggles to query her book it’s all Twitter’s fault.

Leaving the talk we assured each other we’d take it slow. Split the stands up so we wouldn’t be bored, as our first signing wasn’t until frustratingly late in the afternoon. So obviously, with the best of intentions, we started weaving our way greedily through the stands, ogling at the glistening covers and snatching cute badges in a giddy and excited rush. We’d done them all pretty much by lunchtime.

Although not as paced as we may have planned we did secure some afternoon entertainment in the form of hunting for rubber bats as we tried to win a proof of Alexandra Christo’s Into the Crooked Places. I managed to snag one off the big Y in YALC and Jo and I are now the proud shared owners of this glittery purple proof. I get it first since I spotted the bat.

The day ended with me deliberating far too much over the book swap, babbling incoherently at Derek Landy as he signed off my book with a skull before meeting our friends for dinner in the evening. In just a slight summer drizzle and a sticky humid evening our tired feet made it back to Jo’s London flat where we compared our purchases and admired our Fairy Loot prints.

On Saturday our friend Hannah joined us. You might think this narrative is going get confusing with two Hannah’s on the scene but lucky for you I’ve told it in first person. You see, I think about my readers.

On a rainy Saturday morning we grabbed our bags, mine now significantly lighter after we’d swung by my office Friday night, and rushed to the convention centre. We knew VE Schwab would be popular and wanted to get low numbered queue tickets but we were nearly 300th in the queue when we stumbled to the ticket stand a mere half hour after it opened. The calmness of yesterday had given way to the weekend that dragged an uncomfortably warm, heaving room full book lovers with it, presenting us with a much more exhausting first few hours.

Slightly dejected we consoled ourselves with our low numbered Malorie Blackman and Karen McManus tickets. Hannah was keen to go round the stalls and it didn’t take much convincing for either us to join her, my formally empty tote now restuffed with more books and a very pretty hardback I won of Fairy Loot.

The afternoon was filled with exciting bookish promise. With clammy hands clutching treasured books we queued in the greenhouse that is the signings area, Jo having traded her 281 for a 39 VE Schwab signing ticket. We were only allowed to get three books signed and one dedicated and Jo swapped out one of hers for my new copy of Vicious. Being the incredible human being she is when we were asked which one we wanted dedicating she got my book dedicated to me! Makes me feel bad for stealing all the cookie dough when we get Ben and Jerry’s.

After absolutely melting in front of VE Schwab, both from heat and from love, we located our trusty plug socket we’d unearthed in previous years and dumped our hauls for a moment of chill. With a brief interlude where we played hunt the bat again in the hope of not having to argue over our pretty purple proof we spent most of the afternoon sitting and admiring a nearby dog. If you’re wondering we are now doomed to forever fight over the possession of that proof. I did manage to win a proof of Thorn of Swans by posting an impressive bird impression on Twitter and got Jo and I chocolate cupcakes from the Fairy Loot stand when they unveiled yet more copies of Caravel are being made. It wasn’t all a loss.

Our final signing was with Malorie Blackman at the end of day. We were both beginning to get slightly steamed and a tad icky by that point, as we flopped down on beanbags next to a nearly cleared out stand. The hour wait was not without it’s perks: we got a sweaty snap with Alwyn Hamilton when she finished signing and, because she is a lovely human, she remembered us from the last three years she’d been to the convention. Possibly our giggles and squeeles are very memorable.

The day, and the whole event, ended with a giddy meeting with Malorie Blackman, who is just too lovely, a quick sugar crash and a sleepy trip home. Now for 364 days of recuperating before we do it all again.