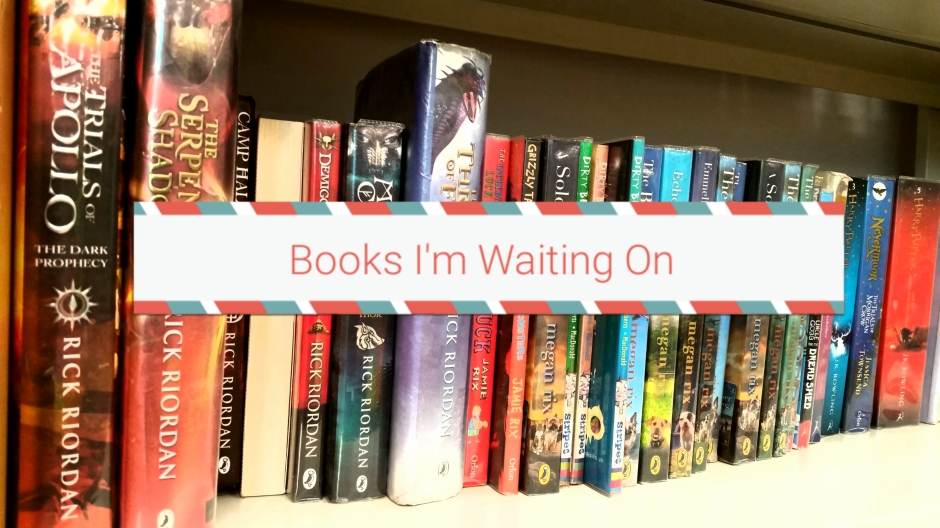 Happy May! Pinch punch first of the month and all that! Want to know why today is so scary? It’s my dissertation deadline! The thing I’ve been pouring my heart into since June last year is finally due! Excuse me while I freak out a little (lot)….

Anyway, here’s my second ever Top Ten Tuesday and I’m changing it up a little! Top Ten Tuesday is a meme hosted by Jana at That Artsy Reader Girl.
On account of my weediness I’m changing this a bit to “Books I’d try to Slay a Lion to Get Early”. I’m 90% sure I’d just get eaten by the lion. Also I’m going to change this one a little bit further. Being a poor, broke student I have always got my books from the library. My parents didn’t really do pocket money so I don’t really own many books and there are just a handful on my tbr, after all these years, that I’m still on a library waiting list, somewhere, waiting for. So I’m going to list those instead:

I loved Septimus Heap when I was a kid. Its a series about a boy who was born into a poor area of a castle called The Ramblings. He’s the seventh son of the seventh son and a very powerful mage, but he gets stolen at birth and is accidentally raised in the army (because somehow the midwife who was supposed to steal the baby messes it up). Meanwhile his mother unknowingly adopts and raises the future queen and current princess after she is smuggled away from her royal mother who’s been assassinated. Confused yet? Yeah it’s a pretty confusing story. But it’s all about these kids discovering who they are.
Anyway now I’ve digressed to an absolute favourite of mine when I was a kid, I’ll bring it back to the actual book in question: Flyte. It was released after I’d left the kids section of the library for good so I never managed to get hold of the final book in the series. I’d followed Septemis and his friends all the way through, watching them grow up in their castle as I grew up myself. But I never finished the tale off. Flyte was more of a token goodbye book than part of the original series anyway, I think it was published for those of us who grew up knowing Sept to have a last chance to say goodbye. But basically, I’m desperate to recover a copy and finally set a much younger me at ease.

Scarlet is the second book in the Raven King series that I spoke to someone on Twitter about not too long ago. The set just after 1066 and is about a king who becomes a rebel in his own lands after his father is murdered. It’s a kind of Robin Hood retelling and, when I read it in my GCSE years, I remember loving it. It’s very descriptive, which I sometimes like, and had a Merlin-y feel to it (and I was a big Merlin fan!). But I never got hold of Scarlet. Just reminiscing about it on Twitter the other day (when someone asked for recommendations of books about Wales) I was reminded of how much I want this novel.

Wow this is a big confession. I’m feeling a little teary just typing this, but I never got to read what happened to the Baudelaire siblings. I followed them all the way through, rooted for them and was truly inspired by Violet (female engineers for the win!). But I never got the last book. It was just never in the library, being the super popular novel it was I never managed to get hold of it. I didn’t understand I could reserve books at this point either so I just assumed that it not being on the shelf meant I couldn’t read it. Sad but true, I will never know what that eye tattoo really meant on Olaf’s ankle. But I suppose part of me will still wants to drift to those kiddy shelves and just finish off that plot…

A series I just love is The Fifth Wave. It’s so well written, the characters are complex and I never see the plots coming. It’s a series written in the middle of the dystopian crisis hitting the world, sounds a little silly but aliens are invading and trying to remove the worlds population. They send 5 waves: the first cuts the power, stops anything that uses electricity from working (cars, phones, planes, you name it). The next was a physical wave, a tsunami that takes out all the coastal towns and cities. Then there’s a plague which kills 97% of people. The fourth wave is a set of aliens hidden as humans who reveal their true form and become ‘silencers’. I won’t tell you what the fifth wave is, in case you haven’t read the book, but let’s just say it gets personal.
The whole series is captivating, edge of your seat stuff as we follow a handful of characters just trying to survive in their dying world. We follow these characters as they learn their new surroundings and they develop so much. Some learn to love, others to love again and all the while everything they do makes them consider their humanity and whether they are better than the aliens they’ve barely met. It’s brilliant and I can’t wait for the last instalment.

This is a series about a group of kids who go to a school for villainy and end up as sort of trouble makers but also somehow top of their class? They’re easy to read and great if you liked Artemis Foul, the writing style and plots are very similar. I started HIVE a few years ago (I enjoy the younger spectrum of YA occasionally, admittedly, just for the easy read and fun!). I only ever read the first four, which was really sad, because they were so captivating. If you ever start feeling a little bogged down and want something light and fun I’d definitely recommend these!

So that’s it. There’s my list of books I never got to finish and would attempt to slay a lion for (ok, maybe not, lions are really scary). So what about? Did you do this Top Ten Tuesday? Can I read your list anywhere? Have any childhood reads that you’d love to finish? Feel free to drop me a message in the comments section!

12 thoughts on “Top Ten Tuesday: Books I’d try to Slay a Lion to Get”

When was the last time you were in a physical bookshop?
If you could travel to any mythical book world where would you go?
What’s the best book you’ve read so far this year?
If you could pull out anything from a book what would it be?
Happy Friday! Tell me something exciting that happened to you this week!
You have a time machine, where would you go?